Meet the Ladies of the Tea Part PT 4

NAME: B-Movie Becky
BLOG: The Horror Effect
AREA OF EXPERTISE: Technical aspects of filmmaking, since she is a film school graduate and aspiring filmmaker and Slasher films, especially Halloween and Friday the 13th series

Upon the lap of my guffawing father, I was raised on the horror film. Armed with a clunky VHS camcorder, I fell in love with film making at the age of thirteen in my rural hometown of Maple Valley, Washington. Countless short films and bottles of fake blood later, I went on to earn a Bachelor of Fine Arts in Film Production, with minors in Honors and Legal Studies, at Chapman University in Orange, California. After graduation, I married the man I met over a friendly game of Counter-Strike nine years ago. We have since graduated from Counter-Terrorist vs. Terrorists to Infected vs. Survivors. When it comes to film making, we are partners in crime and are constantly working on new projects. I am currently editing a documentary on ecology for a non-profit organization and continuing to build my resume with film experience.

Sarah “Fatally Yours” Jahier is the founder, editor and journalist for horror review site Fatally-Yours.com. Sarah took the horror world by storm back in 2005 when she debuted Fatally-Yours.com and it is now the go-to site for all things horror, covering everything from independent to mainstream horror films, music and books to horror products and clothing companies as well as featuring interviews with the big names in horror as well as the up-and-comers.

Sarah prides her horror site on giving honest reviews for the genre she so loves. Everything is done “for the love of horror” (the motto and tagline of Fatally-Yours.com) and in an effort to truly represent all the great (and not so great) horror that is out there! You can find her at:
www.fatally-yours.com

NAME: Nicki Nix
BLOG: Hey! Look Behind You!
AREA OF EXPERTISE: I'm a true fan girl at heart and soul. 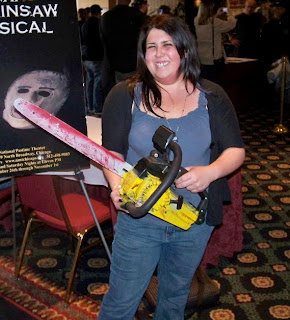 I started my blog a year ago on Jan 7th. I'm sure like most of us, I grew up on a steady diet of all things horror. My parents were great enough to never censor me and my brothers and they also let us have cable tv in our rooms. That was the start of my exposure to horror movies. I'd spend my Saturday nights watching back-to-back Tales from the Darkside and Monsters. Then I would spend my Sunday nights staying up later than I was supposed to watching Friday the 13th series. I'd scan the tv guide to find the latest horror movies listed and I'd raid my local Blockbuster and Hollywood video for anything horror movie with an interesting cover box. I grew up not knowing that my love for horror was acceptable amongst other people. My friends knew how much I loved it because that's all we watched at sleepovers and that's I spent my weekends at the theater seeing whatever horror movie came out.

It wasn't until after college where I meant a friend that introduced me to the world of conventions. At first I was so excited to be meeting awesome people but just being surrounded by my own kind broke me out of my shell. My social discomforts goes away when I go to conventions. In the real world I'm very uncomfortable about people I don't know and it takes me time to warm up but when I'm around my people, I know I can chit chat about anything and they get me. It's nice to be around people who get you.

WELCOME TO THE TEA PARTY OF THE DEAD 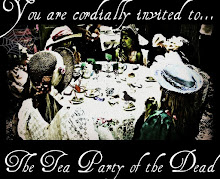 TPOT D is the best collection of female horror bloggers the internet has ever seen. The Ms. Horror Blogosphere competition has brought us together, and rather than part our separate ways now that the competition is over; This group has been organized (inspired and blessing given to us by the LoTT-D) to keep us horror chicks together. This group is a showcase, collaborate effort, promotional tool, and means for people to enjoy all the blogs of female horror writers across the globe.